The problem with genuine prophets is that they’re boring and predictable.  They don’t make for an intriguing story.  To illustrate this point, if you made a Hollywood thriller about a true prophet’s life and preaching, the synopsis here’s how the synopsis would go:

Police in Los Angeles are baffled by a string of brutal homicides committed by an unknown killer who mocks them with a cryptic calling card at the scene of each crime.  But five minutes after Detective Isaiah Callahan begins investigating, he figures out who the killer is.  Then he finds a bunch of evidence and arrests the guy and the guy gets tried and convicted.  The end.  Credits.

See how boring that is?  Where’s the conflict?  Where’s the tension?  Where’s the struggle to find out the true answer?  Where’s the rocky, bloody path filled with false turns and dead ends?  Where’s that big, fat emotional payoff that comes after the main character rises up from his brutal defeat and finally gets it right by nailing the perp?

So when a prophet predicts something and that prediction simply comes true, people get bored.  When Isaiah says that a virgin will conceive and bear a son who is God with us, and then exactly that happens without a bunch of false leads and wrong targets toying with our emotions (at least for those of us who are living after the birth of Jesus Christ), folks lose interest very quickly.

But if you can convince people that someday, one of your predictions will come true and they’ll be among the very (s)elect few who had it all figured out from the get-go (even if it’s the 400th get-go), they’ll gladly suffer a thousand prophetic misfires for the promise of that one bulls-eye.  They’ll keep following you, the false prophet, up your self-made mountain of false predictions about the rapture, the return of Jesus, the arrival of the Potato Gun Spaceship.  And no matter how long they remain left out in the cold atop Mount Joseph Smith or Charles Taze Russell or Harold Camping, they’ll keep shivering in the cold just to be able to say that they knew Kevin Spacey was Keyser Söze all along.

I am a dog.  I have allergies that cause me to chew off my own…

Utilizing the subtle art of animatronic creepy voiceover, this video teaches us that not all…

I’m feeling all nostalgic. My very first Lutheran Satire video. Actually I think I made…

After graduating from Concordia Theological Seminary with a Masters of Arts in Historical Theology, I…

Ok, so I don’t try very hard.  That’s true. And I recycle heresies like they’re… 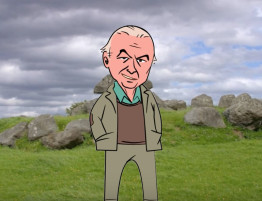 Once upon a time in ancient Bulgondia, there was a local scientist named Turgon. Turgon…